But why dis‐activate the airbag, which is intended to protect the driver or the passengers?

1 – Because when the driver uses his vehicle as a battering ram, the airbag in his steering wheel is very likely to inflate and hamper him in his gestures at the precise moment of impact but above all in the following seconds.

The main aim of this so-called lead vehicle is to get through but also to remain capable of getting away and clearing a passage for the other vehicles coming behind. Hence the airbag in this situation becomes a very serious handicap that can rapidly put the aggressors in a position of superiority.

The same is even truer for the driver of the car containing the passenger at risk.

2 – If the passenger-side airbag opens against the bodyguard sitting next to the driver, the bodyguard is in turn placed in a position of weakness because of this airbag that has inflated and continues to be a handicap for several seconds afterwards. He cannot properly use his weapon and runs the risk of being hampered by the airbag for several seconds – situations which the aggressors will not fail to exploit to their advantage.

Secondly, the ABS system will be dis-activated on the rear wheels, which are the ones to which the handbrake applies, for this type of driving technique. But be careful, some carmakers have put the handbrake on the front wheels, making the car incompatible with this very-high‐security driving technique. Some dis-activate the whole ABS system when the driver is capable of reproducing an equivalent level of braking or even a more precise level in the case of certain drivers.

Why dis‐activate a security system that is extremely useful in a car when we are talking of very high security?

The answer is precisely because we are in extreme situations, with trained experts, and it is possible to achieve an even shorter braking distance with perfect mastery of technique with or without ABS.

How is this done?

It involves braking with the handbrake and the help of the steering wheel in such a way as to make the vehicle perform a complete U-turn. This technique is applied only when, for example, the attackers have placed a heavy truck right in the middle of the road and made it impossible to ram the latter because it is equivalent to a solid brick wall in these conditions.

In these circumstances, security drivers try to get away to the rear and often in this manner if the road is wide enough. If not, it will mean confrontation of the kind they try to avoid unless absolutely essential.

Warning: when using the handbrake and turning the wheel, the car will systematically find itself in the reverse lane of the road.

Warning: the safety ratchets on the handbrake are systematically dis-activated before setting off so that the handbrake can never remain blocked at the end of this maneuver. 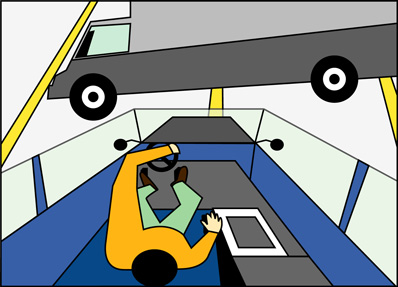 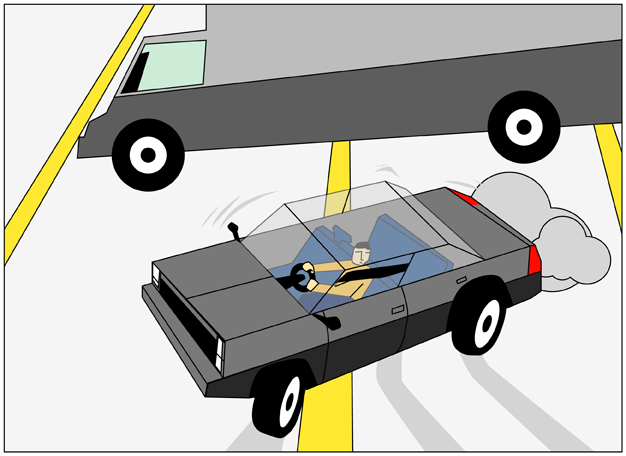 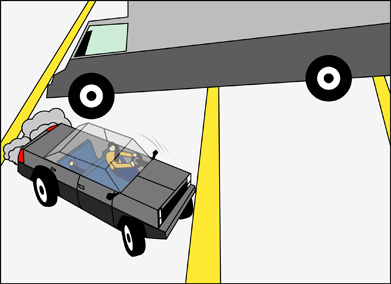