To return to the question of collision of the vehicle with the obstructing vehicles, the passenger or passengers will place themselves in the fetal position – still obviously with their seat belts attached. The shock will be even more difficult to survive than for the driver because of the lack of other points of support. Their safety will be mainly based on the quality of the way in which their seats are attached, the wearing of safety belts and the quality of the driver.

For his part, the driver will take up all the necessary positions for absorbing this shock, which will be very violent even if the speed may not seem excessive.

If the car is not equipped with a footrest on the left he will have to put his foot on the transmission tunnel or wheel arch.

None of his limbs must be tense and his body must be preferably in a general position of the fetus type and relaxed, but ready to absorb the shock using his muscles.

His hands will necessarily be placed at quarter past nine on the steering wheel and ready to push on the wheel with all his force at the time of the impact with the other vehicle. It is as if he wanted to push himself and his car by his own force against the other car.

The car will arrive at the moment of impact with the other vehicle or vehicles at a precise speed of 30 to 35 miles per hour had a constant and balanced speed. A lower speed will not make it possible to pass through hand to push the vehicles in the correct manner to make a getaway. The least hesitation or breaking at the time of impact will produce the same effect.

To take the other extreme, a higher speed risks damaging the ram vehicle in particular at the level of the steering and hence risk immobilization for mechanical reasons, giving victory to the aggressors. This speed range must be scrupulously observed for the maneuver to be successful, causing the least damage to your car and the most mechanical damage to the opposing cars.

As of the impact with the vehicle or vehicles to be got out of the way, you must necessarily have the psychological and physical determination to hit them in order to push them out of the way.

In order to arrive at this physical and psychological state, it is extremely important to want to push on the steering wheel as well as on the place where your foot is resting and at the same time to press fully down on the accelerator pedal only and precisely at the time of impact with the vehicle or vehicles. Your whole body and mind are trying to push your own vehicle against that of the aggressors. You are looking far into the distance at the point where you wish to go in order to make your getaway. Yet again, determination and your look are practically crucial in your victory over the aggressors.

The ram vehicle must imperatively hit the blind angles of the vehicle and as flat as possible against the blocking vehicle or vehicles.

Never in the middle. 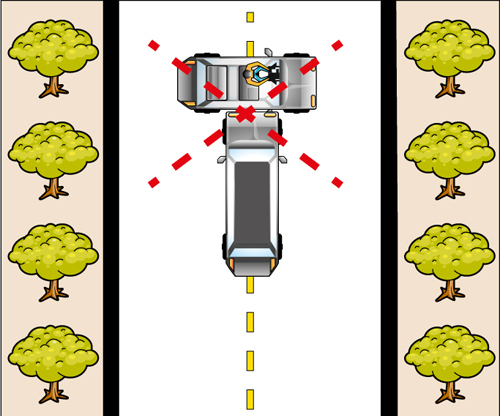 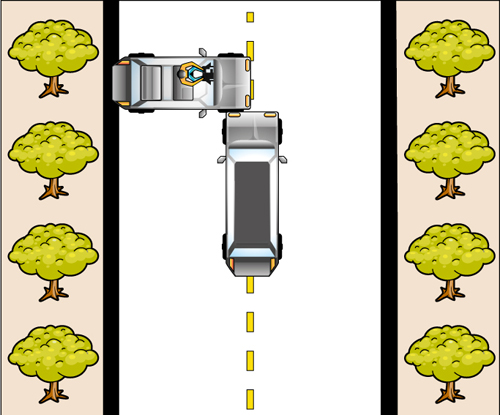