THE HILARITY OF THE REDNECK

A vehicle is used for moving around and moving around means a constant change of situation, of place, of atmosphere and, for those who bother about these things, of risk. Someone who was just now in the opposite situation to the other, now finds himself in the same situation, perhaps without noticing it, given that so many people drive the way they watch television. The result at one time or another, at the spot I described earlier or in thousands of others, is the same — namely a huge increase in the risks of accident and sooner or later a real accident involving the destruction of one’s own life or those of others. But what does that matter by comparison with the colossal revenues generated by the situation, especially when a whole population seems to be applauding its own death sentence? And my best friend, someone who has spent years observing others from a professional standpoint but in a field much more amusing than my own, told me that the situation on the roads was preferable to a war. It is well known that the various wars, in the 20th century especially, resulted from an economic system that was no longer capable of raising living standards for everyone. In our attitude to the roads we again find this diabolical subjectivity so much admired by the non-pacifists.

The (ir)responsibility of the media

Obviously, the press and especially certain journalists that I can well see driving the car I criticized earlier, will take pleasure commensurate with the fear revealed by their behavior on the road, to play up this fear and pass it on to those not in a position to make a personal judgment. This they do by accusing, as has been fashionable for so long, the trucker, said to be responsible for all road accidents. If they cannot openly accuse the driver in the case I mentioned — and what I described will take place there or elsewhere some time or another — they will merely report an accident involving a heavy goods vehicle, stressing the «yet another» aspect and cleverly avoiding going into the real causes of the accident. Here again, it is easy to understand the various economic motivations underlying this indecent misinformation which makes life a hell for drivers of heavy vehicles in France in particular and poisons the relations between car drivers and truckers. Especially when the heavy vehicles are unsuited to the present road barbarism. Nor should one overlook the problem of the elderly drivers, with small and normal vehicles, who pay a heavy tribute on the roads to the behavior of our racing drivers, which remains totally unsuited to the older people who have just as much right to live and to use the roads. Fortunately, two-day training programs organized for a very modest price by the French road safety body can help them to continue to drive without being killed, although training programs can never restore their youth and their reflexes.

If a large – too large — number of elderly people die on the road, here too there is an economic interest at work, need I say more! As for the drivers of heavy goods vehicles, far too many people are unaware of the merit they have in performing a job which, in the conditions in which they are forced to work (because of the French road mayhem) means they deserve a medal at the end of their career. But since it is preferable to exploit them in what are often totally inadmissible working conditions with wages that bear no relation to their legal responsibilities, let alone their psychological responsibilities in the innumerable and sometimes catastrophic situations in which this context has plunged them, it is fashionable to vilify them, year after year, through the intermediary of the press with the result that they are unable to receive a normal wage and acceptable working conditions. It hurts me to see them treated as slaves and to see those same people who have brought them to this situation, get their kicks by preaching the “good word” to anyone who cares to listen.

Can it be normal that people who only want to move around normally should literally be taken hostage by this situation in the name of so-called Liberty? 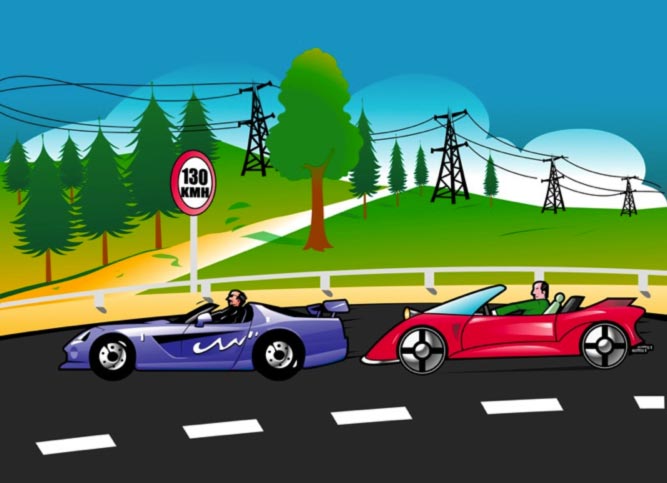 The blindness of the French population to this situation makes me think of the «Stockholm syndrome». This is the name given to a type of behavior following a hostage-taking. As time passes, the hostages find themselves completely in the power of the hostage-takers and even go so far as to want to marry them in, or at least to go on seeing them in prison for several years. This is the result of a certain system of specific fear that has led them to be blinded by their living death sentence.

If we go north, i.e. to the Netherlands, the same remarks apply both in regard to the behavior of some French car drivers and the stinking diesel fumes given off by their cars. I am thinking especially of Amsterdam, teeming with cycles and tramways. A town where there is no need to be literally insane to ride a bicycle as there is in a large town like Paris, given the accident and health risks due to the breathing in of the diesel fumes that may have their place in the countryside but certainly not in large towns. This is yet another example of a lobby that puts profits before people, without any consideration for the future repercussions on health standards. On the contrary, here too the extreme negativeness of the situation produces various types of economy that become extremely beneficial for those well placed to profit from them by reason of the damages produced by the proliferation of these mechanisms so beloved by the rednecks. When a room has been stinking for a long time and the people who live in it have gotten used to it, no one can smell anything any more.