Here are other driving positions that are particularly dangerous for the driver, his passengers and other road users in the event of an accident as well as those that are the least suited to safe driving. Here is a typical example of a driver totally dominated by his vehicle. Even before taking the wheel, he worships his car and uses it more as a means of showing off and communication because of a personality problem rather than a means of transport. Of all dangerous drivers, this driver is the worst. 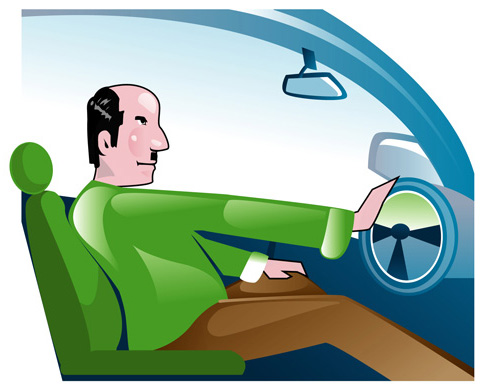 The seat is as far back as possible and the back is inclined to a ridiculous extent.

The headrest is practically never adjusted and in this driver’s view using a seat belt is shameful, being only for wimps who do not know how to drive and who are therefore the ones that will have an accident.

Psychologically, this driver never calls his behavior into question and remains permanently convinced that it is the others who are dangerous – a psychological transfer of his own behavior and responsibilities onto others.

This driver is often involved in the most serious road accidents. He is extremely dangerous for others and for himself.

He runs the risk of serious injury of the kind mentioned earlier but, in addition, because the seat is practically horizontal and because he is not wearing a seat belt, in the event of a frontal collision his body will slide under the dashboard, causing him to break his legs and suffer very serious injuries.

Only rarely will his spinal column be left intact. Seats that are covered entirely in leather will make it even more likely that he will slide under the dashboard in the event of a frontal collision. This type of driver virtually never changes his driving position — or his behavior on the road.

The best advice is never to allow yourself or those dear to you to be driven by him. The risk of having an accident is extremely high and any accident that occurs will be extremely violent. And for young girls, fasten your seat belts and good luck!

The right hand at full stretch on the wheel at 12 o’clock or ten o’clock is a special case of the psychological type we have just analyzed. This position is a give-away sign of an aggressive driver. Frequently, the safety distances from other vehicles are not respected, nor are speed limits. 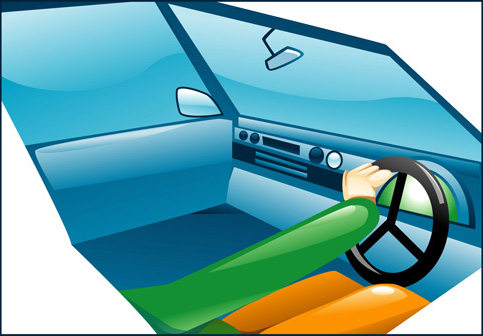 The character who positions himself in this way in his car, whether in movement or stationary, often believes himself to be superior to others and in many cases identifies himself with film stars seen in high-speed chases in action films.

What he forgets is that film stars and their stand-ins use this driving position for specifically acrobatic purposes (stunts and U-turns on the handbrake). This position reflects a certain deliberate aggressiveness for a certain type of film but it is to be totally banned for driving in the case of the «family man» or for safe driving in general. Other drivers take up this position out of imitation and because of the environment.

Some who take it up do so unconsciously and with no awareness of the consequences. In addition to the risk of injury and to the inability to turn the wheel in a relaxed manner, it increases fatigue. This position of the hands on the wheel is widespread in regions and countries that have the worst safety record (the same is true of the previous position).

All the driving positions shown here are wrong and there is absolutely no symbiosis between vehicle and driver. The driver shown here couldn’t care less about driving. He is not aggressive to start with but can rapidly become so. 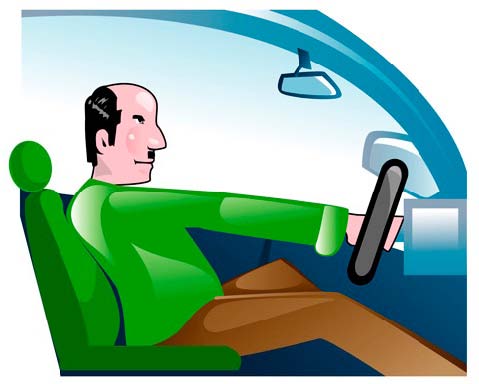 He couldn’t care less about the environment in which he finds himself when driving his car, neither for his rear-view mirrors or anything else. He is being 80% driven by the car. He is used to having little «bumps» and he will continue to drive as long as others look out for him. Until the day comes when…

Driving without a headrest or with one that is badly adjusted is a trivial matter at first sight. 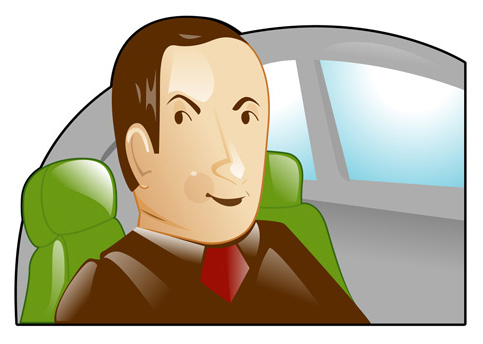 In fact this is highly dangerous. A driver can go for years without having either a collision from behind or indeed any accident at all. But it will be a serious matter when another car runs into his from behind.

A violent shock from behind will then lead to the instantaneous death of the driver or his passengers. This is due to «whiplash», simply because the headrest is badly adjusted, unsuitable or absent altogether.

A moderately violent shock from behind can lead to injuries and muscular and nervous lesions at the level of the neck which will bring on headaches that can last several years after the shock but also loss of memory, migraine and even the impossibility of normal sleep for a long period. Many lesions involving the neck are in fact irreversible.

In this picture we can also see that the rear seat passengers have no headrests.

They are therefore in danger but in addition, they have no seat belts. The front seat passengers are in the same situation. 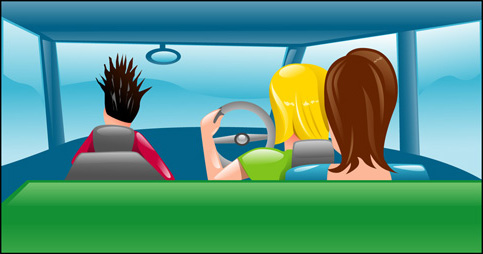 If a vehicle runs into this one from behind, the result will be as follows. The heads of those in the front seat will be jerked backwards just at the level of the back of the neck and the passengers in the rear seat will meet the same fate. If, more unfortunately still, the vehicle colliding from behind sends our passengers and their vehicle into the ones in front of them, the shock will take the following form:

All this adds up to a considerable carnage that can be avoided by behavioral intelligence and anticipation. Driving in a way that keeps your passengers safe keeps you safe as well.

You have your seat belt and your headrest properly adjusted but in the rear seat the passengers have neither. They are in danger in the event of an accident, but so are you, perhaps even more than your passengers in certain cases!

A headrest is a very important element in the safety of all the passengers in the vehicle and not just a matter of comfort. 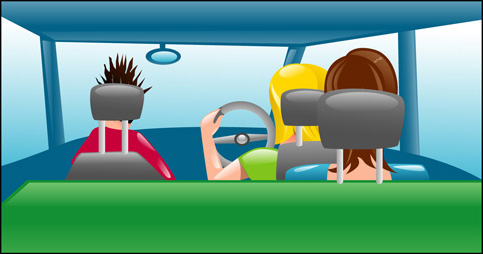 It is up to the driver, in his responsibility for his passengers, to see that their headrests are properly adjusted as shown earlier. Passengers in the vehicle may not themselves be drivers and do not check on safety measures when they go into a vehicle. The driver is solely responsible.

Seat belts attached, seats and headrests properly adjusted all round. Isn’t that better? You are going to move them through time with yourself and you have your passengers under your entire responsibility. You are their sole protector and they have entire confidence in you.