Some drivers have a bad habit of putting on their makeup in their car and in traffic hold-ups. 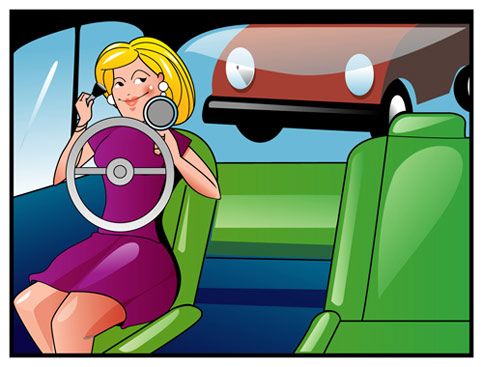 For some, this is a regular habit, for others only exceptional. Ladies, you who have such a desire to please — and how nice that is for the rest of us — just imagine what your pretty face might look like if another vehicle ran into yours.

The world of the road and of driving is one of perpetual change. Each instant is different from the last because there is always movement, whether one’s own car is stationary or moving. Don’t run this risk; it really isn’t worth it.

How many children throughout the world are crippled or killed each year because they were not safely attached in a seat appropriate to their morphology?
The figure is terrifying. The slightest jamming on the brakes will systematically throw the child forward and lead to very serious injuries, not only to itself but also possibly to you. A collision with another vehicle will also inevitably be very serious. 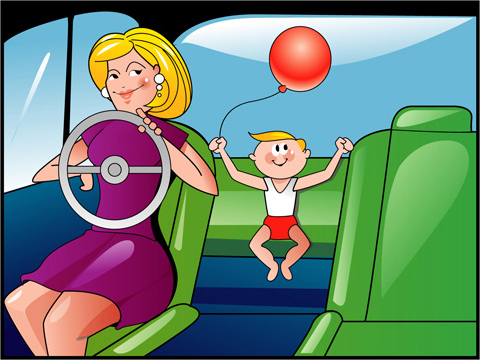 Manufacturers of car seats have made great strides in the design and manufacture of seats for children. The safety of a child is priceless. Plenty of information is available and it is those who sell these products that are in the best position to advise you. Driving children without installing them in a proper seat is bordering on a criminal act. Indeed, some countries punish it severely.

And who can say they are wrong?

One final piece of advice. Never buy a safety chair second-hand because you would never be able to be sure of the reliability of a product that has already been used, sometimes in extreme conditions. Children not correctly attached in the vehicle will tend to play and move about.

If by misfortune they were to open the windows they might lean out or fall out in trying to catch something or simply have their heads sticking out of the car.

And then, if, for example, a motorcyclist were to be driving up between the lines of cars at that moment, the result could rapidly become dramatic.

Moreover, if you have no other choice than to drive with a child on the front passenger seat – to be avoided if at all possible – always remember to disactivate the airbag and push the seat back.

Remember that there are also side airbags on some of the latest cars.

If your car does not allow you to disable the airbag, never, never put children on the front seat or near to it since the airbag opens almost instantaneously in an accident.

In certain cases the airbag will then also severely injure the child when it inflates.

The place for a child in a car is at the rear in a seat suited to its morphology and correctly attached with its own seat belt.

Even more dramatic is the case of people who transport their children between their bodies and the safety belt. 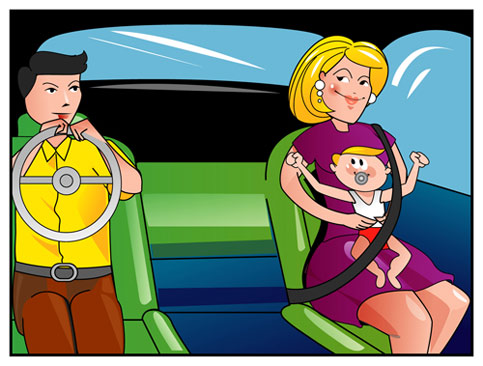 This situation is potentially catastrophic for the child, whether on the front or the back seat. Some cars are equipped with belt tensioners for safety in the event of a collision. The weight of the adult carrying the child means that the child will be crushed between the seat belt and the adult’s body in the event of an accident or sudden braking.

It is now possible to attach a fitment to the middle of the steering wheeled to take a mobile phone. 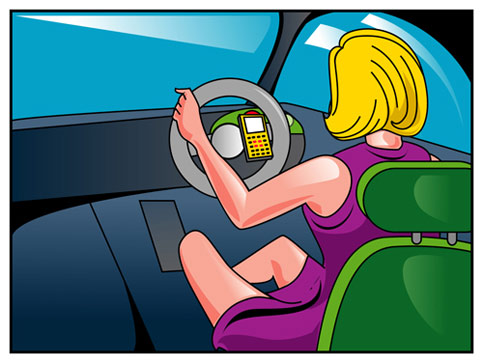 If the airbag opens following a collision or, as has already been seen in certain very rare cases, as a result of a bad contact, the driver runs the risk of being severely injured by the phone.

The sudden inflation of the airbag, which is located precisely under the part of the wheel where the telephone is placed, will send it thudding into the driver or the passenger. This is a rare occurrence, but unfortunately not unknown.

Driving and phoning are incompatible with each other. Doing so multiplies the risk of having an accident by four to six times. A telephoning driver is no longer on the alert regarding his environment or himself. 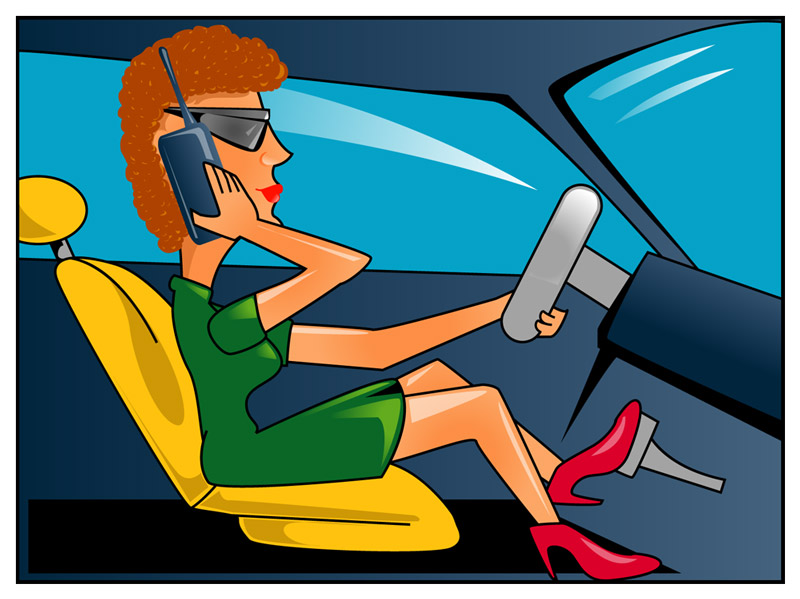 Driving safely is a question of concentration and an act of precision in itself.

Is there such a thing as an intellectual activity that leaves it possible to practice another at the same time without running the risk of making mistakes, especially in performing the one that attracts the least attention? Concentrating on driving a vehicle and on the various movements of others around you in order to apply reasonable anticipation is precisely an intellectual activity accompanied by a small degree of muscular work.

Don’t forget that road accidents throughout the world have caused tens of millions of deaths (1,200,000 a year or 3300 a day), not to mention those seriously injured, precisely because of the non-recognition and non-control, of an intellectual nature, of the situation and of movement.

The symbiosis between the brain and environment in this situation is at its lowest level.

Using earphones or «free-hand» kits is no remedy to the situation caused by the intellectual uncoupling related to one’s driving. It can merely improve the possibility of movement of the upper limbs and fool the policeman trying to deal with this problem. The best solution is to put the phone in answering service mode on getting into the vehicle and ringing back later.